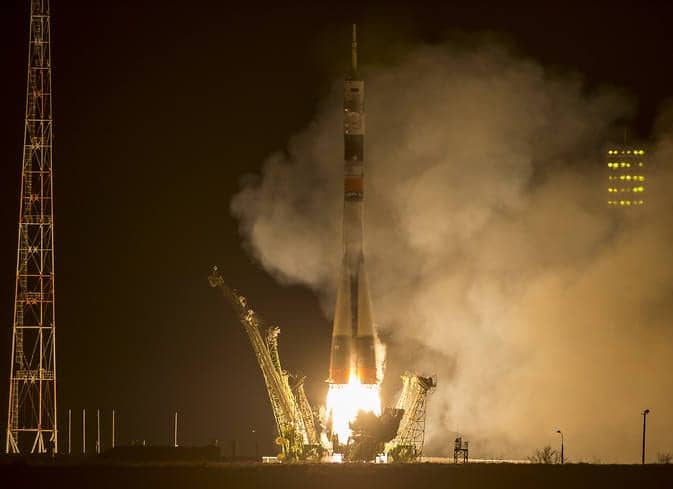 Three crew members representing the United States and Russia are on the International Space Station after launching from the Baikonur Cosmodrome in Kazakhstan at 3:42 PM EDT Friday (1:42 AM, March 28 in Baikonur).

NASA astronaut Scott Kelly and Russian Federal Space Agency (Roscosmos) cosmonaut Mikhail Kornienko will spend about a year living and working aboard the space station to help scientists better understand how the human body reacts and adapts to the harsh environment of space.

“Scott Kelly’s mission is critical to advancing the administration’s plan to send humans on a journey to Mars,” says NASA administrator Charles Bolden, in a release. “We’ll gain new, detailed insights on the ways long-duration spaceflight affects the human body.”

The arrival of Kelly, Kornienko, and cosmonaut Gennady Padalka returns the station’s crew complement to six. The three will join Expedition 43 commander Terry Virts of NASA, as well as flight engineers Samantha Cristoforetti of ESA (European Space Agency) and Anton Shkaplerov of Roscosmos, who have been aboard the complex since November.

Virts, Cristoforetti, and Shkaplerov will return home in May. At that time, Padalka will take command of Expedition 44, becoming the first person to command four station crews. Padalka will return in September, while Kelly and Kornienko will remain aboard until March 2016.

The 1-year mission will focus on seven key areas of human research. Functional studies will examine crew member performance during and after the 12-month expedition. Behavioral studies will monitor sleep patterns and exercise routines. Visual impairment will be studied by measuring changes in pressure inside the human skull. Metabolic investigations will examine the immune system and effects of stress.

Physical performance will be monitored through exercise examinations. Microbial changes in the crew will be monitored, as well as the human factors associated with how the crew interacts aboard the station. Each of these key elements carries a potential benefit for populations here on Earth, from functional improvements for patients recovering from a long period of bed rest to improving the monitoring of immune functions of people on Earth with altered immunity.

Data from Kelly and Kornienko’s 342-day expedition will be used to determine whether there are ways to further reduce the risks on future long-duration missions necessary for deep space missions.

In tandem with the 1-year mission, Kelly’s identical twin brother, former NASA astronaut Mark Kelly, will participate in a number of comparative genetic studies, including the collection of blood samples as well as psychological and physical tests. This research will compare data from the genetically identical Kelly brothers to identify any subtle changes caused by spaceflight.

The tests will track any degeneration or evolution that occurs in the human body from extended exposure to a microgravity environment. These new twin studies are a multifaceted national cooperation between universities, corporations, and government laboratory expertise.

Expedition 43 will perform scientific research in several other fields, such as astrophysics and biotechnology. Among the planned experiments are a study of meteors entering Earth’s atmosphere and testing of a new synthetic material that can expand and contract like human muscle tissue. The crew members also are scheduled to greet a host of cargo spacecraft during their mission, including the sixth SpaceX commercial resupply flight and a Russian Progress resupply mission. Each flight will carry several tons of food, fuel, supplies, and research materials. No spacewalks are planned during Expedition 43.

The International Space Station is a convergence of science, technology, and human innovation that demonstrates new technologies and makes research breakthroughs that are not possible on Earth. The space station has been continuously occupied since November 2000. In this time, it has received more than 200 visitors and a variety of international and commercial spacecraft. The space station remains the springboard to NASA’s next giant leap in exploration.