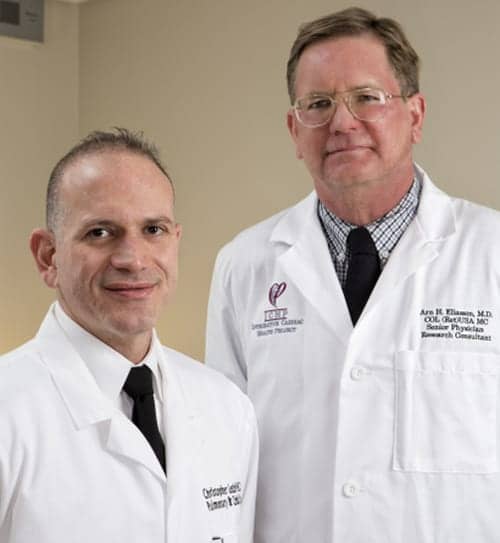 Doctors Christopher J. Lettieri and Arn H. Eliasson acknowledge the irony in their treatment for restless legs syndrome (RLS). While the sleep disorder is generally precipitated in patients by inactivity such as sitting or lying, patients who undergo the duo’s treatment are required to remain still for at least an hour to reap the benefits.

In two studies, the MDs at Walter Reed National Military Medical Center (Eliasson has since retired) showed that pneumatic compression devices (PCDs), the same ones that prevent deep vein thrombosis, can alleviate RLS symptoms in patients and even completely resolve the disorder in some people. “Because of the available treatments for RLS, we were looking for something different. The pharmacological treatments are largely effective but have side effects, plus some people can’t tolerate them,” says Lettieri, who is the Program Director of Sleep Medicine at Walter Reed and a Professor of Medicine at Uniformed Services University. “And the medications can cause other problems, such as fragmenting sleep. So sometimes you’re treating one sleep disorder but causing a different one. We were looking for a nonpharmacotherapy.”

The solution came in the form of an air pressure generator that’s approximately the size of a large toaster. The doctors employed Aircast VenaFlow PCDs in their large-scale study, although Lettieri says many other brands will yield the same results. Once the PCD is plugged in, flexible hoses carry compressed air to plastic bladders embedded in soft cloths wrapped around the patient’s lower legs. Patients easily don them at home in less than 30 seconds. “They’re pretty simple,” Lettieri says. 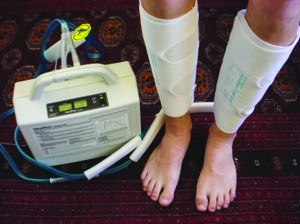 Many different brands of PCDs exist. Some are available over-the-counter and others require a prescription. Courtesy of Drs Eliasson and Lettieri

In one study, the PCDs were programmed to inflate the leg wraps for 5 seconds every minute. The therapeutic devices generated 40 cm H2O of air pressure with each inflation cycle, while the “sham” devices generated a 3- to 4-cm H2O pressure rise. Participants were instructed to wear them for 1 hour in the evening. The results were astounding. More than a third of subjects using therapeutic PCDs experienced a complete resolution of symptoms,1 while none using sham devices experienced complete remission. Subjects with more severe RLS experienced greater symptom reduction. After unblinding, therapeutic devices were provided to eight subjects, and three patients purchased commercially available, similar devices.

“It worked great,” Lettieri says. “People discontinued their medication without any rebound symptoms. Every measured variable, such as quality of life and daytime function, got better.” An intriguing residual benefit also came to light. While some patients’ symptoms returned within a few days of discontinuing PCD use, others reported continued improvement for weeks, even when not using the device. The cause for the residual effectiveness remains unknown. Lettieri cautions that at a point, each patient needed to return to using the PCD as symptoms came back.

Two benefits of PCDs as treatment for RLS are: 1) they are noninvasive (there is evidence that external counterpulsation2 may be effective as a nonpharmacological treatment but it’s more invasive); and 2) they are well tolerated, more so than drugs. Currently, about 5% of Lettieri’s patients present with restless legs primarily, and another 5% suffer from it secondarily. In about 10% of these patients, he prescribes a PCD, while the rest stick with the classic medications. Lettieri emphasizes that quality of life is important to analyze before treating a patient with RLS. “It’s one thing to have restless legs, but it’s not a medical disorder unless it causes a negative consequence,” he says. In his practice, he uses both the International Restless Legs Syndrome Study Group Severity Scale and the Johns Hopkins Restless Legs Severity Scale—“they each capture something a little different,” he says—plus the Restless Legs Syndrome Quality of Life Instrument before prescribing treatment.

Why Do PCDs Work?

Much like the cause of RLS, the reason the PCDs work also remains  unknown—though there are theories. “Why do we see RLS so much in certain populations, such as those with end-stage renal disease and peripheral vascular disease? We think the one thing RLS populations have in common is microvascular disease,” Lettieri says. “We theorized that we could treat RLS with a readily available therapy that improved microvascular blood flow, plus, as an added benefit, provided external stimulation similar to massage.”

Some possible explanations of the efficacy of PCD in treatment are: a) release of humoral mediators from the endothelium that provide central feedback to modulate symptoms; b) improvement of local perfusion secondary to improved venous drainage of the limbs with consequent relief of mild, otherwise subclinical ischemia; and c) a temporary decrease in the amount of third space fluid that may enhance lymphatic flow and removal of symptom-causing substances from the lower limbs.
While the current research hasn’t yet explained exactly why it works, it’s clear that PCDs are working, and not only for Lettieri and Eliasson’s patients. The large-scale study was published in the journal Chest in 2009, yet the physicians continue to receive e-mails every week from other doctors and patients thanking them for an RLS treatment that finally worked.

“A common question I get is: ‘How long should I use the PCD?’” Lettieri says about the e-mails and phone calls. “In the study, we asked patients to wear it for an hour because we thought that was realistic. People frequently ask me, ‘If I use it all night, is it better?’ I don’t have that answer because we didn’t test it for longer durations. Intuitively, it would make sense that the longer you use it, the more effective it will be. I’ve heard of people using the PCD all night and it doesn’t seem to disrupt their sleep.”

PCDs to treat RLS have a way to go before they may become a mainstream solution. “It’s an off-label use for PCDs, so they can be hard to get,” Lettieri says. “Plus, you have to justify somebody spending the money to purchase it.” 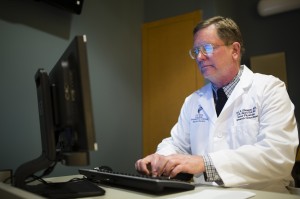 Lettieri notes that, over the course of years, the PCD may ultimately be less expensive than repeated medication refills. However, “it’s clearly easier for someone to swallow a pill, and the PCD is cumbersome,” Lettieri says. “For people who have persistent symptoms while on medications or who can’t adjust to medical therapy, a PCD is a viable alternative.”

Lettieri says he is able to get payor approval the most easily in patients who have shown intolerance to pharmacological therapies. “It’s harder to get them approved for the patients who just want to avoid medications, though you can still do it.”

Another reason PCDs haven’t taken off is some patients refuse to sit tethered to a device for an hour (symptom-free or not). Lettieri and Eliasson had begun a study to test the effectiveness of portable PCDs but were forced to abandon it when the PCD maker went out of business. To restart the study with a new manufacturer would have been time-prohibitive. But Lettieri is optimistic that, whether it is he and Eliasson or a wholly different research team, someone will eventually be able to see a portable PCD study through. “The portable PCDs would be great,” he says. “Someone will figure it out.”

When to Use Oral Appliances for OSA Treatment

Kids’ Sleep Patterns Affected by Media Presence in the Bedroom