Nasal Dilator Manufacturers Have a Nose for Complementary Therapy 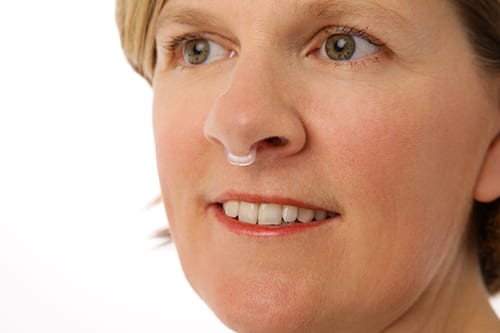 Above photo: Rhinomed’s Mute improves breathing through the nose and can reduce snoring that is caused by nighttime nasal congestion or obstructions such as a deviated septum.

At recent sleep medicine tradeshows, over-the-counter nasal stents, cones, and strips have caught the attention of professionals ranging from sleep physicians to dentists. They are not approved to treat obstructive sleep apnea, but the devices have benefits over nasal sprays in treating nasal congestion or allergies in sleep disorder patients.

The nasal dilators seen in the aisles of various sleep medicine exhibit halls in 2016 as well as on the shelves of retail stores may also have a place as a complementary therapy for some sleep disorder patients.

Nasal dilators come in various forms including in-nostril stents, in-nostril cones, and external strips, and are designed to mechanically open users’ nasal passages. By increasing the diameter of the nostril, the dilators can lessen ailments such as cold/allergy congestion, deviated septums, and simple snoring. Though they cannot directly treat any sleep disorders, nasal dilators may help obstructive sleep apnea (OSA) and other patients who suffer from nasal congestion in tandem with a disorder—in a similar way to the commonly recommended nasal sprays but with distinct advantages and limitations.

According to a 2014 International Journal of Otolaryngology paper, an improvement in nasal resistance, whether through the use of nasal dilators or other means, may improve self-reported sleep quality.1 Nasal dilators are generally not recommended in patients with OSA, but they may be beneficial for those with simple snoring associated with rhinitis and/or nasal valve stenosis.1

In a study published in Archives of Otolaryngology—Head & Neck Surgery, researchers examined the effects of nasal valve dilation on snoring and obstructed breathing in 11 patients with habitual snoring and/or OSA. They found the frequency and severity of obstructed breathing decreased significantly with the nasal dilator.2 In addition, there was a substantial decrease in snoring noise with the dilator in all patients who presented with snoring noise above these levels during the control night.2

In a literature review published in JAMA (Journal of the American Medical Association) Facial Plastic Surgery, researchers aimed to determine the efficacy of over-the-counter (OTC) mechanical nasal dilators and found the products to be effective in treating nasal obstruction. “Our findings suggest that nasal strips and nasal clips effectively relieve obstruction of the internal nasal valve, and we recommend that patients explore their use before turning to surgical intervention,” the paper states.3

Over-the-counter nasal sprays are commonly recommended as a complementary therapy for OSA patients who are using a primary therapy of CPAP or an oral appliance. Michelle Lovato, CEO of OXY-AID nasal dilator manufacturer Respitec, says dilators have advantages over these sprays. “Nasal sprays can help reduce inflammation in the nasal passages within a certain amount of time,” she says. “The great aspect of a nasal dilator is that it opens up the nasal passages immediately and will stay open until you take the device out.”

Another advantage of nasal dilators is sustainability; Lovato says OXY-AID can last for years. Lovato adds that customers appreciate that OXY-AID is a natural alternative to sprays that may contain steroids. She says, “At Respitec, we believe in the power of good nasal breathing and its central role in our overall health. OXY-AID is a holistic solution to a serious issue.”

Michael Johnson, CEO of Rhinomed, makers of the Mute nasal dilator, says, “The well-documented challenges facing the use of nasal sprays—steroids—and the often reported rebound effect that can occur from continual long-term use make [nasal dilators] an attractive potential alternative. There is increasing recognition that long-term use of sprays can cause issues down the line for patients.” Johnson adds, “We are seeing an increasing number of physicians look to technology like [our product] Mute—that mechanically stents rather than relying on steroids—to help resolve the issue.”

Louise MacDonald, co-founder and CEO of Sanostec Corp, which makes Sinus Cones and Max-Air Nose Cones, says, “There are few limitations to the use of nasal dilators in the obstructed sleep airway setting as long as the nasal airflow restriction is due to anterior nasal airway obstruction such as nasal congestion, nasal valve issues, or deviation of the nasal septum.” However, MacDonald adds that nasal dilators generally have limited efficacy when nasal airway obstruction is posterior to, or “above,” the nasal valve area, such as with turbinate hypertrophy or enlarged adenoids.

Respitec’s Lovato says patient use during sleep and with CPAP therapy may be a notable limitation of nasal dilators. “People sometimes take the device out in the middle of the night without realizing it, and it cannot be used with every form of CPAP machine,” she says.

There have also been mentions in the medical literature of nasal dilators falling out during the night, and at least one case study of an inadvertently inhaled device causing pain. The authors of that case study note, “Different types of internal nasal dilators may be more or less prone to inhalation, depending on the construction. The dilators may also break into smaller pieces, because of weakening by longtime use.”4

Today’s nasal dilators are typically available OTC at retail stores and from the manufacturer’s website, and some can be purchased wholesale by sleep professionals for retailing to patients (of course, rules and regulations must be checked before retailing OTC products at your practice).

Exhibiting at several sleep shows for the first time in 2016, Mute from Rhinomed is an OTC product designed to prevent nasal collapse and improve and increase the diameter of the nostril. Johnson explains, “Mute plays a specific role in improving nasal patency and airflow issues. While they are relevant to a group of people dealing with nasal obstruction, Mute is not designed to treat sleep apnea.”

Johnson explains that snoring that originates as a result of nasal obstruction can be treated by employing a combination of devices; by stenting the nose and increasing airflow, Mute can play a role in addressing simple snoring. If simple snoring originates from the lower airway, combining Mute with a boil-and-bite oral device may work as a complementary therapy. Johnson adds that for snoring that may occur as a result of positional issues, the combination of a positional device that promotes supine sleeping and Mute can improve airflow through the upper airway and they may work well together to address the issue. “We recognize that the perfect solution may be generally resolved through a combination of solutions, and we work with sleep physicians and doctors to walk the patient through the solutions as seamlessly as possible,” says Johnson.

Johnson adds, “We designed [our] device to help people to breathe better. We certainly believe that nasal technology can play an increasingly important role in diagnosing and treating a range of sleep, CNS [central nervous system], and respiratory issues.”

Sanostec Corp exhibited two internal dilators—Sinus Cones and Max-Air Nose Cones—at the American Academy of Dental Sleep Medicine (AADSM) 25th Anniversary meeting. Max-Air Cones are designed to maximize nasal breathing volume to gently relieve a deviated septum and stop snoring, while the Sinus Cones open nasal airways to remedy sinusitis, clear nasal congestion, and relieve a blocked nose and collapsed nasal airways for a deeper sleep, according to the product website. MacDonald says both Sinus Cones and Max-Air Nose Cones can be used inside CPAP masks as well as with oral appliances to relieve nasal airway issues and improve outcomes and compliance. “We think that nasal dilators are an easier and healthier choice in nasal airway relief for those with OSA and nasal congestion. Patients are always surprised at how much airflow improvement they feel upon inserting our soft Max-Air Nose Cones and Sinus Cones,” says MacDonald. “The products provide an immediate and significant increase in nasal airflow, so the snorer can instantly realize that their normal breathing is restricted and that with the aid of our little devices their airway patency is substantially improved.”

Users of Sanostec’s dilators insert the device into the nostrils to improve nasal breathing.

OXY-AID, available from Respitec and seen on the exhibit floor at SLEEP 2016, is a device designed to prevent the nasal passages from collapsing during nighttime breathing, including during REM sleep in particular, according to the manufacturer. OXY-AID can be used with CPAP if the patient feels claustrophobic or suffers from nasal valve collapse that CPAP may not be able to fix, according to Lovato. She adds that OXY-AID can help individuals who suffer from sinus infections as the prevention of the nasal passages collapsing can allow for improved airflow and may help drain the sinuses better.

Respitec’s OXY-AID is made of medical grade stainless steel with silicone tips.

Perhaps the currently most well-known brand of OTC nasal dilator is Breathe Right, whose nasal strips are designed to improve sleep, reduce snoring caused by nighttime nasal congestion, and relieve nasal congestion due to colds, allergies, or a deviated septum. It lifts the nasal passages and opens the nose to help users breathe better so they can sleep better, says Christie Vergalito, brand manager for Breathe Right nasal strips. Vergalito also says the nasal strips have been clinically proven to reduce and even eliminate snoring. They are made of flexible, spring-like bands that fit right above the flare of the nostrils, and the underside of the strip is adhesive. As the bands attempt to straighten back to their original shape, they lift the sides of the nose and open the nasal passages. Vergalito says, “Breathe Right nasal strips are a simple solution to a better night’s sleep for nasal congestion sufferers, and they are available in a variety of options to appeal to the needs of consumers.”

“On The Nose” Treatment for Sleep

In the future, nasal dilators may be used as a treatment for other conditions beyond simple snoring or as complementary therapies.

MacDonald says she already sees patients and practitioners using the company’s nasal dilators for more and more conditions, and she receives requests for new uses and innovations within their product lines. For example, the company recently launched Max-Air Nose Cones Performance after 5 years of research and development to improve nasal breathing and increase oxygen during athletic pursuits.

According to Lovato, Respitec is continually looking for ways to improve the breathing of customers and their overall sleep experience. She says, “In the future we hope to provide a more complete solution for those with OSA. The market for nasal dilators will only be emphasized as we begin to realize the importance of proper breathing and its role in our overall health.”

“What is clear is that the nose has an important role to play in health and wellness. We clearly see the nose as playing a significant role in the treatment of a range of issues,” says Rhinomed’s Johnson. “It is vitally important that clinicians recognize this and deal with nasal issues as part of the way they resolve sleep and respiratory issues.” 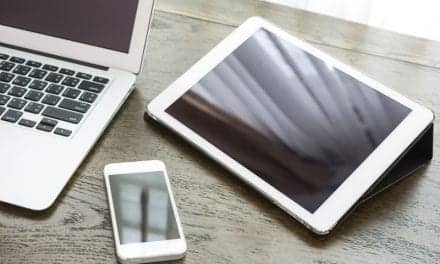