Compared to dim placebo light, study particpants assigned to bright white light between noon and 2:30 pm for 6 weeks experienced a significantly higher remission rate (minimal depression and return to normal functioning). More than 68% of patients who received midday bright light achieved a normal level of mood, compared to 22.2% of patients who received the placebo light.

The group receiving bright light therapy also had a much lower average depression score of 9.2 compared to 14.9 for the placebo group and significantly higher functioning, meaning they could go back to work or complete tasks around the house they hadn’t been able to finish prior to treatment.

The study was published Oct 3 in the American Journal of Psychiatry.

“Effective treatments for bipolar depression are very limited,” says lead author Dorothy Sit, MD, associate professor of psychiatry and behavioral sciences at Northwestern University Feinberg School of Medicine, in a release. “This gives us a new treatment option for bipolar patients that we know gets us a robust response within 4 to 6 weeks.”

Patients also experienced minimal side effects from the therapy. No one experienced mania or hypomania, a condition that includes a period of elation, euphoria, irritability, agitation, rapid speech, racing thoughts, a lack of focus, and risk-taking behaviors.

“As clinicians, we need to find treatments that avoid these side effects and allow for a nice, stable response. Treatment with bright light at midday can provide this,” says Sit, also a Northwestern Medicine psychiatrist.

The study included 46 participants who had at least moderate depression, bipolar disorder, and who were on a mood stabilizer. Patients were randomly assigned to either a 7,000 lux bright white light or a 50 lux placebo light. The light therapy patients were instructed to place the light box about 1 foot from their face for 15-minute sessions to start. Every week, they increased their exposure to the light therapy by 15-minute increments until they reached a dose of 60 minutes per day or experienced a significant change in their mood.

“By starting at a lower dose and slowly marching that dose up over time, we were able to adjust for tolerability and make the treatment suitable for most patients,” Sit says.

Sit and her colleagues also observed a noticeable effect of bright light therapy by 4 weeks, which is similar to other studies that test light therapy for non-seasonal depression and depression during pregnancy.

Light therapy has conventionally been tested using morning light at awakening because previous research has suggested that morning light helps reset circadian rhythms and can be helpful in the treatment of SAD, Sit says. However, the mechanism of response is unclear in bipolar disorder. To understand the possible effects of midday bright light on circadian rhythms in patients with depression and bipolar disorder, Sit and colleagues are planning new studies to investigate. 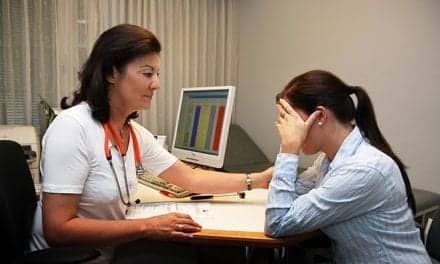 How to Talk to Sleep Patients About Seeking Mental Health Care