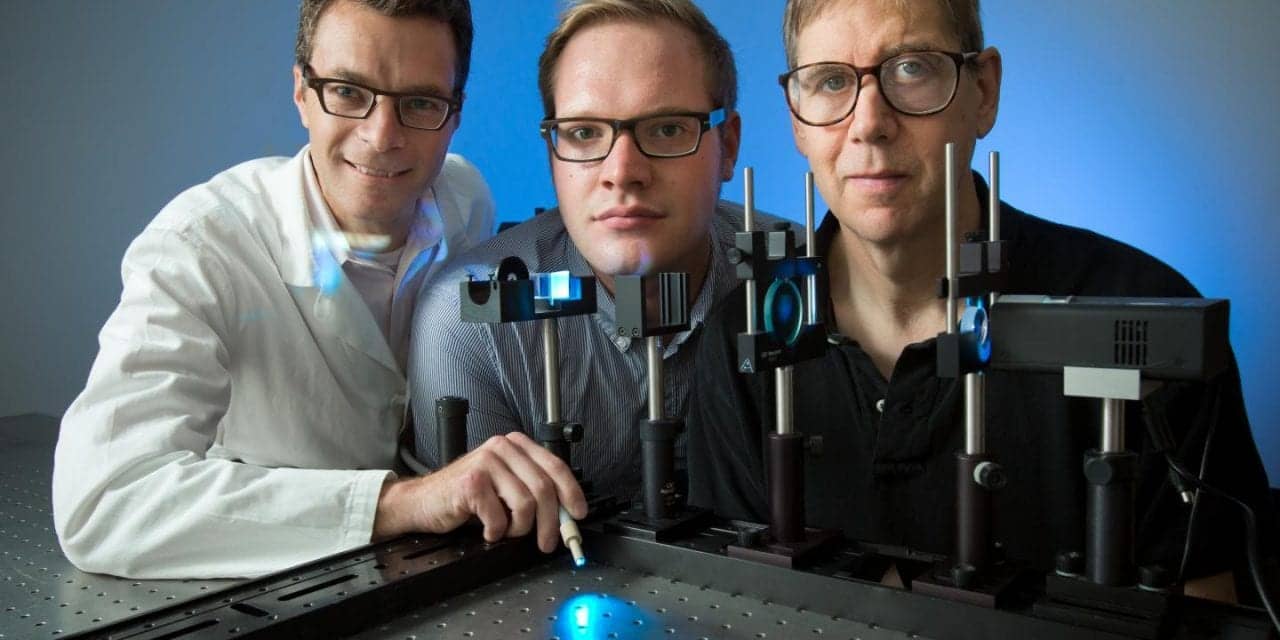 Blue light can both set the mood and set in motion important biological responses. Researchers at the University of Pennsylvania’s School of Medicine and School of Arts and Sciences have teased apart the separate biological responses of the human eye to blue light, revealing an unexpected contest for control. Their work addresses the properties of melanopsin, a light-sensitive protein in the eye that establishes the rhythm of our day-night cycle and the familiar constriction of the pupil to bright light. They measured the pupil response to stimulation of melanopsin and of short-wave-sensitive (S) cones, the other blue light-sensing cells that operate in daylight. Surprisingly, they found that melanopsin and S-cones have opposite effects and compete for control of the pupil in blue light. Their complete results are published in the current issue of PNAS.

“The challenge of studying melanopsin is that it is very sensitive to blue light, a short-wave light emitted by digital devices including smartphones, tablets, and computers, as are S-cones,” says lead author Manuel Spitschan, a Penn graduate student in psychology, in a release. “Previous studies in the human eye have not separately studied the S-cones and melanopsin because flashing a blue light stimulates both of these cells, so we didn’t know if what a person saw or the response of the pupil was from one or both.” To overcome this problem, the Penn team developed a special class of visual stimuli: they produced flickering light that stimulates melanopsin but is invisible to S-cones, and a second flickering light that stimulates S-cones but is invisible to melanopsin. The lights were created using a machine that can sculpt and switch between computer-designed rainbows of light.

The researchers had 16 people watch this flickering light while the response of their pupil was recorded. The light that stimulates melanopsin made the pupil slowly contract. To their surprise, they also discovered that stimulation of S-cones made the pupil get larger. That is, when the S-cones of the eye captured more light, the pupil enlarged, the opposite of what is generally thought of as the natural pupil response. This means that blue light sets off a tug-of-war between melanopsin and S-cones to make your pupil smaller or bigger. The melanopsin effect is stronger, resulting in the familiar shrinking of the pupil to bright light of any color.

“For the first time in people, we are able to probe the relationship between melanopsin signals and the cones and how they work together or in opposition,” says David Brainard, PhD, RRL professor of Psychology, director of the Vision Research Center, and director of the Institute for Research in Cognitive Science. And what do these special flickering lights look like? “The flicker that stimulates S-cones looks like it is switching between a bluish and yellowish color. The flicker that stimulates melanopsin, however, is hard to see, and looks like a soft glow that rises and falls in brightness.”

Light enters the human eye and is imaged on the retina. It has long been know that the retinal image is sensed by neurons known as the rods and cones. The rods operate in dim light levels and allow us to see at night. It is the signals from rods and cones that the brain converts into the images we see.

Recently, though, another class of retinal cells has been identified that also senses light. These cells are known as intrinsically photosensitive ganglion cells, and they contain the protein melanopsin. Melanopsin is sensitive to light at wavelengths intermediate to those sensed by the S and M cones. It appears that it primarily mediates light-driven functions other than conscious vision, such as setting our circadian clock and contributing to control of the pupil.

The work of the Penn team makes it possible to isolate and study the properties of melanopsin in people, separate from the cone cells. We can now ask what we “see” with melanopsin.

“This is important because we think melanopsin could be involved in clinical conditions,” says Geoffrey K. Aguirre, MD, PhD, a behavioral neurologist and associate professor in the department of Neurology. “For example, it seems that too much stimulation of melanopsin produces the feeling of pain from light that is too bright, and not having enough melanopsin stimulation may be part of seasonal affective disorder, in which people become depressed when they don’t have enough light exposure. Having now teased apart the melanopsin and cone responses to blue light, we can study how the eye is involved in these disorders.”

A patent on this alternative photoreceptor isolation method and its applications has been filed by the University of Pennsylvania with Spitschan, Aguirre, and Brainard as inventors. In addition, they have founded a company with the Penn UpStart incubator with the goal to commercialize a device based upon these techniques.