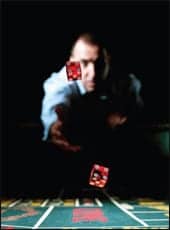 Restless legs syndrome is a neurological disorder characterized by the urge to move the legs, which is partially but temporarily relieved by movement. Patients may have a worsening of symptoms at rest and in the evening and, as a consequence, sleep disturbances. Restless legs syndrome is common and may affect 10% of the population. Evidence-based and clinical guidelines identify dopamine agonists as a first-line treatment for daily restless legs symptoms.1 There has been recent buzz in the media regarding the possibility of dopaminergic agonist medications such as pramipexole (Mirapex) causing pathologic gambling in some patients.2,3 This is sensational and interesting, but what is the real science regarding the risk for dopaminergic agonist medications causing pathologic gambling?

Any pharmaceutical treatment may have adverse events or side effects. Dopaminergic agonist medications have been implicated in causing compulsive behaviors not only in patients with restless legs syndrome, but also in patients with Parkinson’s disease. In addition to gambling, use of these medications can result in compulsive behaviors including card and video game playing, fishing, gardening, intense interest in established hobbies, hypersexuality, compulsive eating, compulsive shopping, locking and unlocking doors, and even repetitive dressing and undressing.4 Pathological hypersexuality has been reported in a study of 13 patients with Parkinson’s disease and two patients ultimately diagnosed clinically with multiple system atrophy. The hypersexuality began within 8 months after starting dopaminergic agonist therapy in 14 of 15 of the cases, including four on dopamine agonist monotherapy. It resolved in the four cases when the agonist was stopped, despite continued therapy with levodopa. Additional compulsive or addictive behaviors, including pathologic gambling, occurred in 60% of this patient group.5 In another case report, seven patients developed compulsive eating in the context of pramipexole use. All of these patients had significant, undesired weight gain, and four had other comorbid compulsive behaviors. In five of these patients, the dose of pramipexole was subsequently lowered or discontinued, which resulted in a remission of the overeating behavior.6

Pramipexole is not the only such medication to be associated with compulsive behaviors. In one case report, a patient with juvenile Parkinson’s disease developed pathological gambling soon after beginning treatment with the dopaminergic agonist pergolide, a mixed D1/D2 dopamine agonist that may also exhibit D3 activity. This behavior remitted upon the discontinuation of the medication. A subsequent therapeutic trial with pramipexole in this patient resulted in the same behavior, but previous treatment with levodopa did not.7

How could these medications lead to pathologic gambling and other compulsive behaviors? On a simplistic level, gambling can be thought of as a form of instant gratification, or instant reward in exchange for taking a risk. Dopamine, especially at the level of the ventral tegmental area and the nucleus accumbens, has a role in the neural representations of what we experience as reward,8 such as that which occurs in gambling.

GAMBLING DIFFERENCES BETWEEN THE SEXES

In researching pathologic gambling, some interesting facts come to light. Gambling behavior is not the same between the sexes. Historically, gambling has been a predominantly male pastime; however, as legalized gambling has expanded, female participation has increased.9 Men typically have an earlier age of onset of gambling behavior, while women may progress to pathological gambling more rapidly after beginning to gamble. Men may be more likely to engage in blackjack, playing cards, and betting on sporting events and horse racing, whereas women tend to play slot machines and bingo. What leads men and women to gamble? Women report that loneliness is the major trigger to gambling, while men report being more likely to gamble due to sensory stimuli attraction. Studies have shown that electronic gaming may be one of the most addictive forms of gambling. In fact, electronic gaming machines have even been referred to as the “crack-cocaine” of gambling.10

HOW DO WE KNOW WHICH PATIENTS ARE LIKELY TO GAMBLE?

Clearly, some people love to gamble while others shy away from such risk. Are there trait markers to help identify patients who may be at a greater risk for developing pathologic gambling while taking dopaminergic agonist medications? A study of 42 patients with idiopathic Parkinson’s disease without compulsive behaviors demonstrated that those having a younger age of disease onset, higher novelty-seeking traits, and a personal or family history of alcohol use disorders may have a greater risk of developing pathological gambling with dopamine agonist medications.11 Another similar study confirmed increased risk with younger age of disease onset, but also revealed increased risk for male gender and longer duration of treatment with dopaminergic agonist medication.12

Are there more objective laboratory tests that can help identify such patients? Pathological gambling may be mediated by genetic factors.13 A study conducted out of the Gambling Outpatient Unit at the Institute of Psychiatry, University of Sao Paulo, Brazil, demonstrated that patients who had a diagnosis of pathologic gambling were more likely to have the genes encoding for a specific dopamine receptor gene. This study revealed an increased propensity for addictions and impulse control disorders and associations of dopamine receptor genes (DRD1, DRD2, and DRD4).14 Although these genetic tests currently are not widely available, they could conceivably be used to a greater degree in the future to identify patients at risk for pathologic gambling and other compulsive disorders.

WHAT SHOULD BE DONE FOR PATIENTS WHO EXHIBIT PATHOLOGIC GAMBLING TENDENCIES?

Changing the patient’s medication prescription may help address the root of a compulsive gambling problem. In one patient whose gambling behavior occurred shortly after reaching the final dose of a combined levodopa and pramipexole therapy, the gambling behavior resolved completely after stopping pramipexole.16 In several other studies, patients who developed pathologic gambling on either pergolide or pramipexole did not exhibit such behavior on levodopa.5,7

Proper sleep may also aid in helping alleviate compulsive gambling side effects in patients taking dopaminergic agonist medications. Studies have shown simple sleep deprivation may take a toll on gambling behavior. Following 24 hours of sleep deprivation, choices involving higher relative risk elicited greater activation in the right nucleus accumbens, signifying an elevated expectation of the higher reward once the riskier choice was made. Concurrently, activation for losses in the insular and orbitofrontal cortices was reduced, denoting a diminished response to losses. These results suggest that sleep deprivation poses a dual threat to competent decision-making.17 This implies that ensuring adequate sleep in these patients might help, although to date such a study confirming this implication has yet to be performed.

WITH GAMBLING IN A FEW, ALSO COMES RELIEF AND IMPROVED QUALITY OF LIFE FOR THE MANY

Gambling aside, clearly these medications do an enormous amount of good. Dopaminergic agonist medications are very effective in the treatment of both Parkinson’s disease and restless legs syndrome. Pramipexole has practically been singled out as the agent most likely to lead to pathologic gambling, but this is a relatively uncommon side effect and pramipexole is also clearly efficacious in the treatment of restless legs syndrome.18

Be sure to warn patients and watch out for the rare instances of pathologic gambling and other compulsive behaviors that may be brought about by the use of dopaminergic agonist medications, but don’t get so caught up in the uncommon side effects that you fail to give these patients the help that they need.

Timothy J. Walter, MD, is the author of REM Illumination Memory Consolidation and is currently the co-medical director of Capitol Sleep Medicine Sleep Diagnostic Center at Grove City, Ohio. He can be reached at [email protected]

Sleep: A Missing Ingredient in Balancing Work and Life

Daylight Saving Time Can Exacerbate Insomnia Due to Sleep Anxiety