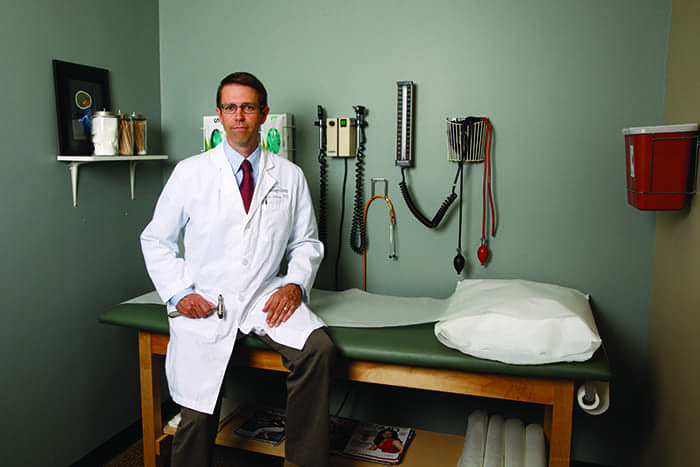 The increasing focus on sleep disorders is critical, Sullivan says, because poor sleep has the potential to lead to other disorders.

John P. Sullivan, MD, developed an early, and enduring, fascination with the brain. It’s a passion that propelled him to medical school (MCP Hahnemann School of Medicine at Drexel University), and on to a neurological fellowship at the University of Rochester. It ultimately led him into practice as a physician, first with Neurology Associates of Erie (in Pennsylvania), and now with Florida Neurology Group in Fort Myers.

“There are so many things we have yet to understand in neurology and neurosciences—the potential for therapeutic advancement is absolutely incredible,” Sullivan says. “To me, it’s the most exciting field in medicine, and the most fulfilling in the long term.”

Sullivan practices general neurology, which affords him the opportunity to see patients across the full spectrum of neurological diseases, including sleep disorders. “When we begin screening patients for these disorders, it’s amazing how common they are,” Sullivan says. “If attention is given to figuring them out properly, real quality-of-life improvements can be made in the lives of our patients.”

The increasing focus on sleep disorders and sleep hygiene is critical, not only because of the impact proper sleep has on patient wellness, Sullivan says, but because poor sleep has the potential to lead to other disorders, like depression and anxiety, and is a risk factor for conditions such as stroke and cardiovascular disease.

Sullivan embraced the opportunity to delve further into sleep medicine by joining the research team for the clinical trial of a treatment device for restless legs syndrome (RLS). The device, called restiffic, is a wrap that promotes pressure on targeted muscles in the foot. While the cause of RLS remains unknown, Sullivan saw the device’s potential to stimulate weak sensory relay to the brain, which could be a component of the condition. It creates a sensation in the foot, which the brain could interpret to relieve the restless leg tendency.

Sullivan’s main professional focus is his patients, but he has also joined research studies, such as a clinical trial for an RLS treatment device.

The restiffic concept intrigued Sullivan, as did the opportunity to seek a drug-free solution for RLS. “Medications had been the mainstay of treatment for restless legs syndrome, and many patients have difficulty tolerating them,” he says. “If they can have an effective non-medication option that is safe, patients will by far and away gravitate toward that.” He signed on as an investigator and was involved in every aspect of the trial, from Food and Drug Administration approval, to patient recruitment and treatment, and analysis of the findings.

Recruitment presented a challenge for the study’s clinicians. The small population of the Erie, Pa, region made finding a sufficient number of qualified participants difficult. Sullivan and his colleagues employed extensive outreach to area physicians, as well as advertising on television and radio, and in newspapers, to meet their target.

The screening process added a new layer of complications. “We had a great amount of interest, but the entry criteria were limiting,” Sullivan says. In order to participate, patients needed to be free of other conditions, such as neuropathy, and could not be using any drugs. Eventually, a pure population of RLS patients who were not on medications was enlisted, and the trial was conducted between 2009 and 2012.

During recruitment and testing, as well as in the analysis of the data, Sullivan’s insights were key. “John was crucial to the overall success of the study,” says Daniel J. Olson, DPM, the study’s lead investigator. Olson observed that Sullivan offered a neurologist’s perspective that he and the other clinician, both podiatrists, considered essential. “Going into the study, we had a strong suspicion that RLS is nerve-oriented,” Olson says. “Because of his expertise in the field—including the negative feedback loop from peripheral to central nervous system and back again—John was able to drive those points home.”

By the study’s conclusion, it had roundly exceeded the clinicians’ expectations. “The device seemed to work more effectively than I thought it would,” Sullivan says. “I was blown away by the positive improvement.” Many of the participants fell into the category of moderate to severe RLS and were reporting substantial increases in the quality and amount of sleep they experienced when using the device. Sullivan says that although the results were surprising, “we didn’t argue with the success.”

“John was as skeptical as I was that a simple foot wrap with pressure points was going to alleviate restless leg symptoms,” Olson says. “Our eyes were certainly opened to how well the foot wrap worked. We started to look into possible theories behind the mechanism of action.” The results of the study were published in the Journal of the American Osteopathic Association in July 2016.1

While Sullivan notes there are some patients with concerns such as neuropathy, Parkinson’s disease, or iron deficiency who call for a drug-related approach to treatment, he has begun prescribing the restiffic device as a first-line therapy for pure RLS patients.

While he found his participation in the restiffic clinical trial rewarding, Sullivan remains committed to his focus on patient care. After eight years practicing neurology in Erie, he took the opportunity to join Florida Neurology Group in Fort Myers, and take on the challenge of a larger market. He was attracted by the size and scope of the practice—along with the sunnier climate.

“It’s a collaborative single-specialty group that’s multifaceted across the neurological spectrum,” says Sullivan. “That allows each of us to pursue our own interests, and serve the needs of the community as well.”

He continues to practice general neurology, and treats patients with sleep disorders (particularly RLS), as well as epilepsy, migraine disorders, and multiple sclerosis and other neuromuscular disorders. Through his affiliation with the Lee Memorial Health system, he performs inpatient neurological services, which generally involves high acuity care, including stroke patients.

Sullivan’s empathic communications skills are a great asset in his work with patients. Olson witnessed Sullivan’s easy rapport when they worked together and valued their subsequent relationship as referring physicians. “Patients felt comfortable around him. He was able to capture their attention very well,” says Olson. “He was soft-spoken, yet clear and concise. When you’re dealing with people who have nerve issues—there’s burning and tingling, they’re not getting sleep—it’s nice to have that calming influence, and we saw that with John.”

Proper insurance for accurate diagnosis will become more critical as demand for medical services increases, especially in the area of neurology, Sullivan predicts.

When asked to look toward the future, Sullivan spoke of the atmosphere of uncertainty in medicine today. “It’s an ever-changing landscape,” he says. “There’s uncharted territory ahead.”

He discussed the escalating difficulties of working with insurance providers. “Many of my patients will forgo necessary diagnostic testing because of increasing insurance deductibles,” he says. “Patients simply don’t have the money to get the testing that they need to help make an accurate diagnosis.“

Sullivan points out that sleep medicine and neurology have particular challenges in that regard. Neurology, a heavily diagnostic specialty, relies on neuro-imaging and other forms of high-cost testing for which payors may withhold approval. Patients who have high deductibles or lack coverage altogether can be reluctant to pursue needed testing as a result. In the area of sleep medicine, Sullivan mentions the difficulties his colleagues face when seeking approval for polysomnography. Insurers often direct patients to home ambulatory testing, which may not provide as accurate a diagnosis. “Adequate access to coverage presents a bigger and bigger challenge,” he says.

Proper insurance for accurate diagnosis will become all the more critical as demand for medical services increases. Sullivan predicts that will be especially true in the area of neurology. “We have an aging population and needs for neurology are going to be increasing,” Sullivan says. “Estimates suggest that in the next 10 years the volume of patients seeking neurologic care will probably increase by at least 25 to 30 percent. Our practice is actively recruiting additional help.”

While patient care remains Sullivan’s focus, he notes that clinical trials, along with the therapeutic advancements that stem from them, present a world of opportunity for his group to explore. “In neurological therapeutics, particularly in the dementia conditions and movement disorders, the opportunities for clinical research are ever-present,” he observes. He cites his group’s active relationship with a local sleep medicine center as another rich source of opportunities for collaborative research.

But it’s clear that Sullivan’s clinical work is the engine that drives him. He spoke of the physician’s opportunity to make an accurate diagnosis and implement a positive therapy, and how those actions can change a patient’s life for the better. “To see that happen in real time, and to work with patients on a day-to-day basis to help make these proactive changes—to reduce disease risk, and avoid disease progression—it’s just tremendous,” he says. “It is an amazing world to live in.”

Dara O’Brien is a freelance journalist.