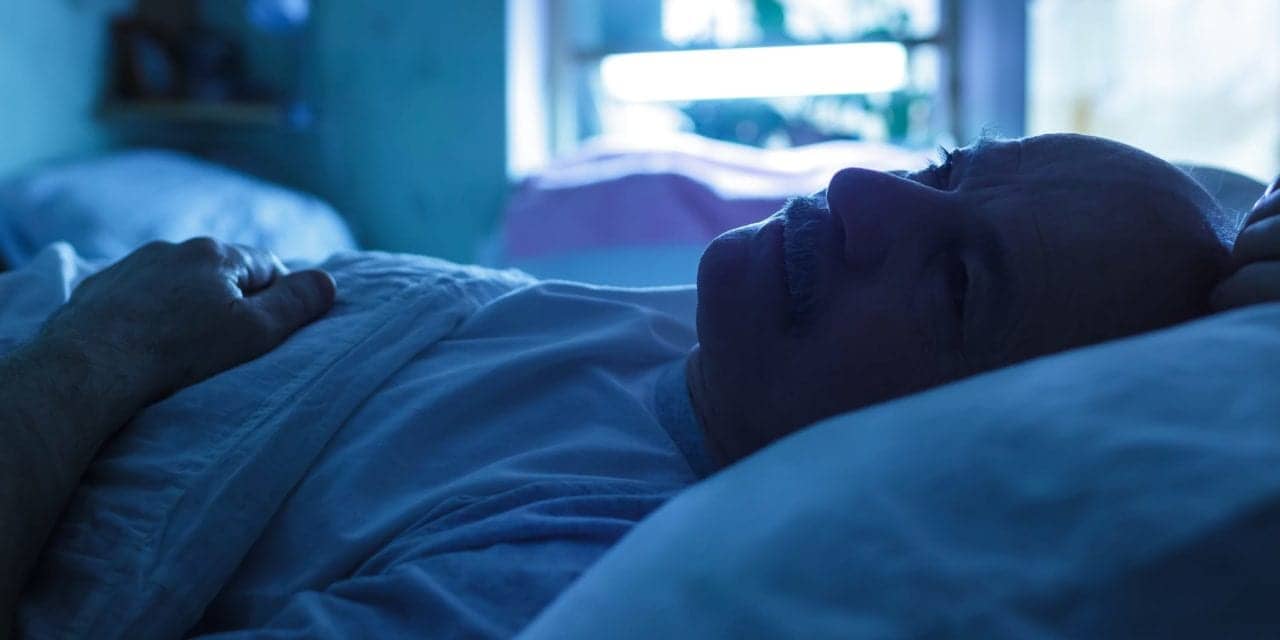 The Merck-funded trial brought patients into the sleep lab to determine whether total sleep time and wake after sleep onset improved.

When confronted with the progressive cognitive decline of Alzheimer’s disease (AD), doctors could be forgiven for overlooking the less devastating sleep-related symptoms that many AD patients also experience. Yet disordered sleep—which occurs in 39% of AD dementia patients—has insidious consequences in this population. Insomnia impacts quality of life for AD patients and AD caregivers. It is even a contributing factor to early institutionalization for patients.

Behavioral sleep strategies, such as regular wake times and morning sun exposure, are firstline interventions, and give AD patients well-planned opportunities for healthy sleep and wake. But when nondrug therapies don’t provide enough relief, safe, efficacious drug therapies for this cognitively fragile population have been hard to come by. A 2011 systematic review on the treatment of sleep disturbance in AD found mixed results for melatonin, limited overall impacts of acetylcholinesterase inhibitors, and “the evidence for sedative-hypnotics and second generation antipsychotics on sleep disturbance in dementia appears to be associated with sedation and attenuating the behavioral and other neuropsychiatric manifestations of dementia rather than a primary effect on sleep.”

Suvorexant is an orexin receptor antagonist that enables sleep to occur via selective antagonism of wake‐promoting endogenous orexin neuropeptides at orexin receptors OX1R and OX2R. A key question for clinicians is whether suvorexant’s safety and efficacy profile for treating insomnia in non‐demented elders is similar for treating the sleep disorder in those with AD, considering the brain changes that occur in AD, including possible dysregulation of orexin signaling.

The results of this study indicate that “functional orexin signaling is sufficiently retained” in mild-to-moderate AD, Herring says. At week 4, suvorexant improved total sleep time by a mean difference of 28 minutes compared to placebo and improved wake upon sleep onset, both assessed by in-lab polysomnography. What’s more, patients taking suvorexant were twice as likely to show an improvement of at least 60 minutes in total sleep time. Suvorexant also showed no evidence for worsening of the underlying cognitive impairment.

In the study, suvorexant did not appear to alter the underlying sleep architecture profile. “What we’ve observed is proportionally appropriate increases across all the sleep stages, for the total sleep time increases,” Herring says, adding that it’s a “highly valuable attribute” of the drug to not perturb the inherent pattern of cycling between REM and non-REM stages.

Since the treatment duration in this trial was 1 month, the investigators “don’t have data to directly address the question for how long [this population] may continue to benefit beyond that time frame,” Herring says. “However the nature of the condition of insomnia is that it persists.” A Merck-funded 1-year treatment study published in 2014 found discontinuing suvorexant to be linked with the return of the insomnia, which suggests a “sustained benefit of treatment, at least in that setting,” Herring says.

Similar to studies of suvorexant in other populations, drowsiness was the most common adverse event in the AD population (4.2% of patients in the suvorexant group and 1.4% of patients in the placebo group). When asked about whether somnolence is of particular risk to people with Alzheimer’s disease, Herring responds, “At baseline, patients were sleeping less than 5 hours a night—a woefully low amount of sleep. There are also risks associated with short-sleep duration, including detrimental effects on cognition.” BELSOMRA’s product labeling does alert prescribers to the risk of somnolence, he notes.

Analyzing change to fall risk is always important in research conducted with a geriatric population. In this study, 4 falls occurred (in 3 patients) in the suvorexant group and no patients in the placebo group. During the run‐in period, 3 falls occurred in patients receiving placebo. While blinded to treatment, the investigators advised that none of the falls were drug‐related. “It’s important to acknowledge that the elderly are more prone to falls,” Herring says. “In a previous randomized clinical trial with BELSOMRA, elderly participants did not experience an increased rate of falls.”

In addition to providing answers about suvorexant’s safety and efficacy in Alzheimer’s patients, this study also contributes to the understanding of whether insomnia in AD is the same as insomnia in patients without dementia—a matter of ongoing debate. “It hasn’t been very well-characterized,” Herring says, noting that some studies refer to probable insomnia in AD as “disrupted sleep.” Because this study used the American Psychiatric Association’s DSM-5 (Diagnostic and Statistical Manual of Mental Disorders) criteria to identify AD patients with insomnia, it supports that insomnia in AD has characteristics similar to those of insomnia in otherwise healthy populations.

With more data available on how to treat insomnia in Alzheimer’s disease patients, perhaps more doctors will directly address sleep concerns moving forward. Herring says, “We hope the attention this trial is receiving will help to improve the recognition of insomnia in AD.”

High-resolution Images Show How the Brain Resets During Sleep