When Lying Still Is Only a Dream 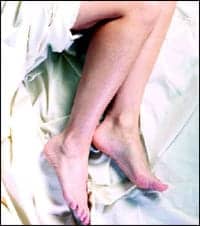 RLS is characterized by an intense discomfort, mostly in the legs, during the evening when at rest. It is an akathisia (a syndrome characterized by an inability to remain in a sitting posture, with motor restlessness and a feeling of muscular quivering), and is often described as a “creepy sensation.” Patients with RLS note a strong urge to keep moving their legs or to get up and walk around to relieve the discomfort. RLS may significantly interfere with the onset of sleep.

PLMD may accompany RLS or occur independently. This idiopathic condition is characterized by episodes of stereotypical rhythmic movement, usually of the legs, although other muscle groups (including the arms) may be involved. The patient’s bed partner typically perceives these episodes as kicks that occur in cycles of 20 to 40 seconds.1 Hundreds of limb movements may occur during a single night, but most of the time they do not awaken the affected person. They may, however, produce many brief arousals that disrupt sleep and decrease the amount of time spent in the deeper stages of sleep. The delayed sleep onset related to RLS and the sleep disruption from PLMD may cause daytime sleepiness.

Several cross-sectional studies have been performed to document the prevalence of RLS and PLMD in the general population. In one large study,2 a total of nearly 19,000 subjects aged 15 to 100 years old underwent telephone interviews during which they answered specific questions. The prevalence of PLMD was 3.9%, and that of RLS was 5.5%. RLS and PLMD were found to occur more frequently in women than in men. The prevalence of RLS increased significantly with age. In multivariate models, factors associated with both disorders included being female; the presence of musculoskeletal disease, heart disease, OSAS, and/or cataplexy; doing physical activities close to bedtime; and the presence of a mental disorder. Factors specific to PLMD included being a shift or night worker; snoring; daily coffee intake; use of hypnotics; and stress. Factors solely associated with RLS were advanced age; obesity; hypertension; loud snoring; drinking three or more alcoholic beverages per day; smoking more than 20 cigarettes per day; and use of selective serotonin reuptake inhibitors (SSRIs). The investigators concluded that PLMD and RLS are prevalent in the general population, and that both conditions are associated with several physical and mental disorders and may negatively impact sleep.

Table 2. Criteria for the diagnosis of restless legs syndrome (RLS).3,4

RLS is primarily a clinical diagnosis. The accurate diagnosis of RLS and PLMD requires a thorough history, physical examination, and polysomnographic tests. Diagnostic criteria for RLS are listed in Table 2. Not all of the criteria need to be present in order to establish a diagnosis of RLS. PLMD may be suspected based on information obtained from a bed partner. If necessary, the diagnosis can be confirmed by electromyography of limb-muscle activity during nighttime monitoring in a sleep laboratory.3,4

There are no known causes of RLS. Some investigators believe that RLS may be due to several overlapping factors rather than one root cause. For example, a combination of genetic factors and secondary disorders (eg, iron or vitamin deficiency) may make certain persons more prone to RLS than others.5 Caffeine and alcohol ingestion can aggravate and increase the frequency of RLS symptoms.6 Possible causes of RLS and PLMD are listed in Table 3.

Like RLS, PLMD has no known causes. PLMD occurs only during sleep and involves unilateral or bilateral movements of limb muscles. The condition may be metabolic, vascular, or neurologic in origin. In addition to occurring commonly in patients with RLS, PLMD may occur in persons with OSAS.8

The symptoms of RLS and PLMD may be triggered by reduced or prolonged limb immobility, such as might occur when sitting in a movie theater or airplane seat. In persons with RLS, symptoms are prevalent at night, and the discomfort usually arises shortly after periods of low activity and calm. The symptoms are most prominent at bedtime, coinciding or occurring shortly after lying down for sleep.

Many persons with RLS and/or PLMD endure the symptoms for years before seeking medical care, by which time they are in their 50s or 60s. Perhaps for this reason, RLS and PLMD are associated primarily with geriatric patients; however, these primary sleep disorders can occur at any age.

Algorithms for the treatment of RLS include both nonpharmacologic and pharmacologic therapy. Patients with RLS are divided into three groups:

Many patients do not require medication, and symptoms often can be relieved with good sleep hygiene and avoidance of medications and factors that provoke symptoms.9

Treatment should begin by examining the patient’s lifestyle and looking for opportunities to initiate lifestyle modification, particularly with regard to substances known to exacerbate symptoms (eg, caffeine and alcohol).10 Because sleep loss can worsen symptoms, attention should be given to optimizing sleep habits.

If changes in diet, drinking patterns, and sleep habits fail to reduce the symptoms of RLS and PLMD, drug therapy is indicated. There are four general classes of drugs used to treat RLS (and associated PLMD): dopaminergic agents, benzodiazepines, opioids, and anticonvulsants. Use of any agent should be viewed as a therapeutic trial; if symptoms do not resolve within approximately 1 month, then a switch to another class of agents is a good idea.10

Dopaminergic drugs can be effective in subduing RLS and PLMD symptoms, including reducing nighttime leg movements. There are reports of remarkably good short-term treatment results with levodopa,11,12 now given as sustained-release carbidopa/levodopa (Sinemet). Most patients with RLS, however, who take carbidopa/levodopa will develop augmentation (ie, the relief of symptoms at night but the development of symptoms earlier in the day than normal). Increasing the dose may worsen the symptoms. Prolonged carbidopa/levodopa use (beyond 5 years) should be avoided because of the increased risk of side effects and the theoretical potential for damage to dopaminergic neurons.

For all dopaminergic agonists, treatment should be started at low doses and titrated upward. Some patients, particularly those for whom pain is a significant factor, may be resistant to therapy with dopaminergic drugs.

Although benzodiazepines do not fully suppress RLS sensations or leg movements, they do allow patients to improve the quality of sleep.13-15 Some persons with RLS who use benzodiazepines may experience daytime drowsiness. Benzodiazepines are contraindicated in persons with OSAS as they can suppress the body’s arousal response to airway obstruction. The most frequently used benzodiazepine for the treatment of RLS symptoms is clonazepam (Klonopin). Diazepam (Valium) also has been used for several decades to manage the symptoms of RLS.

Opioid medications are prescribed by many physicians who treat RLS extensively.16 The pain-killing, relaxation-inducing qualities of opioids can help patients who experience moderate to severe RLS symptoms.

Two double-blind, randomized trials used crossover methodologies to evaluate the effectiveness of oxycodone (Oxycontin, Roxicodone) and propoxyphene (Darvon) in improving the symptoms of RLS.10,17 Outcome measures included subjective ratings of RLS symptoms and polysomnographic analysis. Oxycodone at a mean daily dose of 15.9 mg both improved subjective ratings and decreased PLMD,18 with evidence of decreased arousals and improved sleep efficiency. Propoxyphene at a daily dose of 200 mg significantly decreased PLMD as assessed by one rating scale but not another, and provided little subjective benefit.10 In both studies, opioids were safe and well tolerated. The results of these well-designed studies suggest that oxycodone provides better relief of RLS symptoms than does propoxyphene.

The results of these double-blind, randomized trials are consistent with those of earlier open-label trials19,20 and case-report series21,22 that provided preliminary evidence of the efficacy of opioids in patients with RLS. Long-term benefit for RLS with opioids has been reported, with little evidence of tolerance or addiction.23

The effectiveness of anticonvulsants for the management of RLS and PLMD appears to stem from their ability to decrease the sensory disturbances (“creepy” and “crawly” sensations) that are common after reduced limb mobility or at nighttime. Unfortunately, side effects are common with anticonvulsants and include dizziness, sleepiness, fatigue, increased appetite, and unsteadiness.

The consequences of RLS, and PLMD can be significant for those affected as well as their bed partners and family members. Although many patients try to self-manage their symptoms, most will eventually seek treatment if symptoms are unrelenting and/or progressive. Optimal management depends on accurate diagnosis, which includes identification of possible triggers, and institution of the appropriate therapeutic modalities.

John D. Zoidis, MD, is a contributing writer for Sleep Review. He can be reached at .

CPAP May Improve PTSD in Veterans With Sleep Apnea 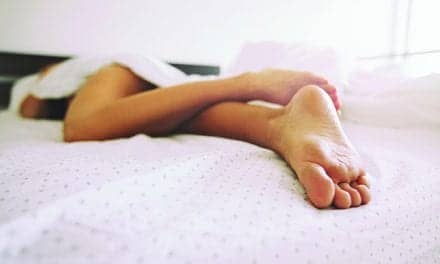 Insomnia Patients Have Higher Risk of Dying from Cardiovascular Diseases