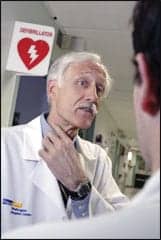 Research is only beginning to unmask the relationship between heart disease and obstructive sleep apnea, but fortunately, the groundwork that identifies the relationship has been established. There is compelling data linking the two, and it is now critical not only that research continue, but also that the message about the relationship between OSA and heart disease reach the necessary medical communities. Leslie W. Miller, MD, FACC, professor and chief of integrated cardiology programs, Washington Hospital Center and Georgetown University Hospital and School of Medicine, Washington, DC, has made it his work to inform the cardiology community about sleep apnea. Sleep Review spoke with Miller about the recognition of OSA among cardiologists, the effects of sleep-disordered breathing on the vast population of heart failure patients, and the benefits that CPAP therapy holds.

SR: What do we know about the cause-effect relationship between obstructive sleep apnea and heart disease?

LM: There is a very substantial overlap in both the biology and the clinical appearance of patients with sleep apnea and heart disease, particularly those with coronary artery disease or atherosclerosis, and the population with heart failure. We know that the mechanisms involved and the secondary effects of obstructive sleep apnea and sleep-disordered breathing relate to an incredible increase in catecholamines in the heart, which is very adverse in developing problems with cardiovascular disease. It enhances inflammation, which we think is very instrumental in the progression of coronary disease and other forms of heart dysfunction. It causes a reactive increase in blood pressure in the lungs as well as peripheral circulation, which has consequences on the heart and primary sleep-disordered breathing patients.

I think one of the best pieces of evidence, particularly with the relationship to atherosclerosis and coronary disease, was a study that examined patients who had sleep-disordered breathing. Half of the subjects were given BiPAP for 4 hours at night for 8 weeks, and half were not treated. Markers that we would not expect to change rather dramatically in an 8-week period were significantly changed in those who could tolerate only a 4-hour minimum of BiPAP support. Significant changes were seen in blood pressure, total cholesterol, triglycerides, and insulin resistance—things that we know are fundamental to the progression of atherosclerosis. The BiPAP really does make a big difference. This was the first study that I was aware of that could prove perhaps a superior benefit to conventional drug therapy for atherosclerosis. There is some very exciting new information coming forward to tie cardiovascular disease and sleep-disordered breathing.

We looked at this in patients who have heart failure, and treating sleep-disordered breathing had one of the most dramatic impacts on their outcomes. We’re beginning to pull together the data that makes the link unequivocal that not only is addressing OSA with CPAP important, but it may have a significant mortality benefit. Sleep-disordered breathing is a disorder that we need to look for in all of these patients because the appearance of these patients and the commonalities of high blood pressure, often obesity, and metabolic syndrome—all of those things are common in the two populations. This data is suggesting that if you treat that, you can reduce their risk, if not mortality, dramatically. I think the link between cardiovascular disease and sleep-disordered breathing is a field that is just going to take off.

SR: Is it true that today many cardiologists are more focused on drug therapy and less focused on addressing potential obstructive sleep apnea? Is this something that needs to be changed?

LM: There is no question that the cardiology community is procedurally based and drug based. We’re dealing with the greatest cause of mortality in the last 100 years, cardiovascular disease, so we are really focused on therapies that have been shown by clinical trials to save lives and reduce mortality. Cardiologists are focused on those two primary forms of therapy—acute intervention with catheters, and drugs. So we’ve been a little bit uninformed about the importance of PAP therapy. I think that it’s slow to gain adoption in a variety of circumstances. Adoption of PAP therapy will take awhile, but I think it is important for this community focusing on sleep-disordered breathing to continue to make the case. As a result, there will be people, like myself, who come into this somewhat not expecting to find the wealth of information and the compelling quality of the data that makes the case for PSG screening. This is something that now has become [adopted] in my heart failure program. Everyone gets a screen for sleep-disordered breathing because they do not all have this classic appearance or phenotype. There are thin people who develop arrhythmias; there are other people who are not hypertensive who clearly have this problem. Not everybody can say, “I really snore,” or “My wife validates that I stop breathing during the night.” There are people who are totally unsuspecting. I think when this is applied as a cost-effective way to easily screen masses of people, we’re going to start seeing the incredible prevalence of this disorder and the benefits of using appropriate therapy.

SR: If a sleep professional wants to relay the importance of evaluating for potential obstructive sleep apnea to cardiologists, what data would you recommend that they show?

LM: Data on survival, if a patient has an apnea/hypopnea index of greater than just 5. If someone asked me, “What’s the real prevalence?” I would say, “It depends on what cut point you use.” If you start lowering it down, you’re talking about possibly 50% of people who have some degree of sleep-disordered breathing. As someone who just really opened their eyes in the last year to OSA prevalence, when I heard the first presentation [on that], I realized you cannot walk by this data. We’re talking lives, we’re talking quality, we’re talking heart failure hospitalizations, we’re talking cardiovascular events for which there is therapy that seemingly now can be shown to have a dramatic impact. As practicing physicians, we have to wake up. The more we can get forums that incorporate cardiologists and the sleep community, there will be cardiologists who walk out saying, “I didn’t know that.” The importance of PSG and CPAP is news to most cardiologists.

SR: Do you see PSG being implemented into standard evaluation of heart failure patients?

LM: It is in our hospital. There are several voices, myself included, working with national guidelines in heart failure management to say that this really should be considered. It’s noninvasive, it’s relatively simple. If screens are cost-effective, then there’s no reason why most patients with cardiovascular disease shouldn’t have this screen.

SR: If we see those standards implemented, do you foresee more obstructive sleep apnea patients being referred to sleep labs?

LM: To be sure. When we opened the lab at the University of Minnesota, within a year they had to find another lab of equal size. This is a very, very common diagnosis. Again, cardiovascular disease is the number one killer in the United States, the number one hospital days, all of these things. You just tapped into the biggest population, and maybe a third of them have some degree of sleep-disordered breathing. It has gigantic potential.

Interview conducted by Franklin A. Holman, editor, Sleep Review. He can be reached at [email protected]

Your Sleep Habits May Worsen Your Asthma