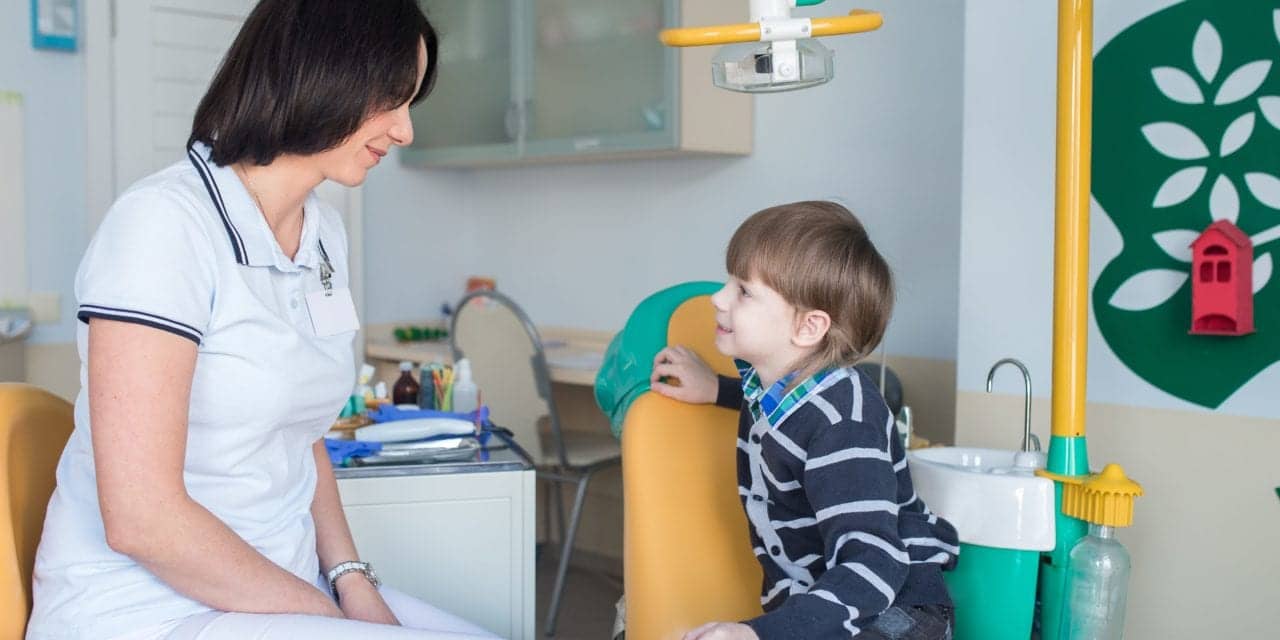 Early intervention can mitigate problems such as bedwetting, and dental sleep medicine practitioners are in the perfect place to screen children and treat those referred by physicians with oral appliances.

Diana Batoon, a mother of two from Scottsdale, Ariz, wanted to help her children beat sleep apnea. As a general dentist who’s practiced for over 24 years, Batoon’s experience with following her children’s treatment journey inspired her to learn more about what contributes to upper airway collapse during sleep.

“It was a wakeup call for me when a pulmonologist recommended antidepressants as the treatment option for my 5-year-old son; I didn’t want to start medicating a child at such a young age,” says Batoon, DMD, who practices at Bonita Dental. “Turns out, when we address the breathing habits of the child using behavioral interventions combined with appliance therapy, we could greatly improve the quality of sleep.”

Seeing how her child’s sleep patterns, comorbidities such as eczema, and even performance in school drastically improved, Batoon was inspired to incorporate dental sleep medicine into her practice. Turns out, Batoon is not alone in her experience with children who have sleep apnea.

“By educating myself further on how dentists can offer treatment for sleep apnea, I realized that sleep apnea is only the end stage of a lifetime of disordered breathing,” says Johnson. “It became my passion to treat these children early so hopefully things like sleep apnea don’t develop later in life.”

Around 90% of children who have sleep-disordered breathing (SDB), which includes obstructive sleep apnea (OSA), are undiagnosed.1 Their symptoms are often mistaken for behavioral issues like attention-deficit hyperactivity disorder.

“It’s not something that can be left alone as something that your child would grow out of,” Batoon says. “As a parent and a dentist, I always let the parents know that early intervention of OSA can change your child’s life for the better.”

It’s a common misconception that snoring is the only tell-tale sign of a child who has OSA. On the contrary, a child with OSA can have noisy breathing, restlessness during sleep, and pauses in breathing, which results in fragmented sleep. Other signs and comorbidities can develop as a result including bedwetting, sleepwalking, growth impairment, hormonal abnormalities, type 2 diabetes, obesity, and metabolic problems.

Snoring is not always present, particularly if the airway turbulence happens in the lower section of the upper airway behind or below the tongue (versus at the back of the soft palatal area around the uvula).

“Clinicians need to evaluate the physiological capability of the upper airway and breathing patterns,” says Yousefian, who practices at Yousefian Orthodontics. “Once a risk is determined, they need to make a referral for proper diagnosis.”

In the past, he adds, dentists have been perceived to be responsible for the health of just the teeth and gums in patients, but a growing number are also screening for potential airways issues.

Stacy Ochoa, DDS, DABDSM, a general dentist at Precision Dental Care, says, “I’d like to see more pediatric patients discussed as part of our conversations about OSA because early intervention is so critical in the development of children.”

Seeing firsthand how her father and her children struggled with OSA and their adherence to CPAP therapy, Ochoa addresses the awareness gap via a membership-only study club for dentists who are interested in pediatric dental sleep medicine. Dubbed “ASAP Pathway,” membership includes on-demand educational videos, a private Facebook group of peers, documents, live webinars, case reviews, and hands-on sessions. “Treating children can be a dynamic process as unlike adults, they’re growing and developing, and it’s exciting to see the growing interest among dentists who want to help their patients grow in the right direction,” Ochoa says.

Echoing Ochoa’s concerns, Yousefian highlights that untreated sleep apnea can become a massive threat to a child’s development. “What we’re really worried about is the neurological impact of the upper airway and sleep-related issues,” he says.

Emily Varsanik, DDS, owner of Davison Dental, says it’s important for dentists to understand that OSA isn’t just an anatomic disease caused by a narrow upper airway. Instead, she looks for multiple factors such as enlarged tonsils, obesity, and genetic conditions that make some groups of children more susceptible than others.

“We not only look at the child’s jaw development and behavior in the office [whether they display signs of excessive daytime sleepiness] but also ask the parents a series of questions that can clue us in on what’s going on when the child is asleep—this is how screening questionnaires are helpful,” Varsanik says.

A meta-analysis found the Pediatric Sleep Questionnaire (PSQ) to have the best diagnostic accuracy in identifying sleep-disordered breathing in children,2 so the PSQ can be a good first step for dental practices to incorporate.

What’s more, screening isn’t limited to questionnaires and clinical predictive tools. For instance, dentists can look for abnormalities in the anatomy and neuromuscular function of the upper airway such as underdeveloped (hypoplastic) maxilla and mandible, which are also commonly found in patients with OSA.

If a child is deemed high risk for sleep-disordered breathing, the next step is to refer to a physician for a definitive diagnosis. And when physicians refer pediatric patients to dentists for treatment, dentists are in a unique position to provide certain therapies.

Although the standard treatment for OSA has been CPAP therapy, appliance therapy has emerged as a viable treatment option for patients who either have mild OSA or have trouble tolerating or refuse CPAP. The American Association of Orthodontists (AAO) states, “Possible negative craniofacial consequences of longitudinal usage of PAP on the developing facial structures should be considered.”3

Adenotonsillectomy is frequently leveraged as a surgical treatment option for children whose tonsils obstruct their airway, but some develop a recurrence during adolescence,4 which illustrates how dynamic the condition can be in growing children.

Oral appliances for children have characteristics different from those that treat adult patients. “Unlike adult oral appliances, pediatric appliances take into account that the child is still growing and are designed to move or make [the mandible] develop forward [for patients with mandibular retrusion],” Varsanik says.

The AAO states, “The use of mandibular advancing devices may be prescribed by the physician, and this prescription is not predicated solely on Angle’s classification of occlusion. In this instance, treatment with an oral device is directed primarily toward airway maintenance and less so with dentofacial orthopedic management. Careful monitoring of facial growth and development is important during this time.”3

According to Yousefian, ensuring that the appliance isn’t creating what’s called the “headgear effect” is key. Headgears have been used to correct a misaligned bite by controlling jaw growth. But this control can have a broader impact in the child’s mouth and distort the growth pattern of bones and muscles beyond the upper jaw. As a result, these underdeveloped jaws and dental arches can narrow a child’s facial structure, which in turn overcrowd the tongue and soft tissues in the mouth and can increase the child’s risk of OSA.

“The good news is that the headgear effect is reversible; instead we’re shifting to an approach that expands the upper arches, nasal cavities, and the lower jaw to support the upper airway for the treatment of OSA, known as teledontics,” says Yousefian, who has written a case report on teledontics, appliance therapy that expands the jaw, in an adult patient5 and is editing a book, to publish later this year, on teledontics and telegnathics (jaw surgery) as a treatment for pediatric sleep apnea.

Yousefian says teledontics can be started as a treatment modality for children as young as 3-years-old. Teledontics also can complement telegnathics for sleep apnea. Although the AAO cautions, “Orthognathic surgery usually is not indicated until craniofacial growth is completed….After considering the potential benefits and risks involved (including the need for later surgical revision), orthognathic or telegnathic surgery could be considered.”3

The payoff of early intervention with sleep-disordered breathing can be huge. Just ask Johnson and Yousefian, who have also treated their children with appliance therapy.

Successful treatment can look different, depending on how OSA has impacted the patient’s life. Johnson recalls treating an 11-year-old who worried about sleeping over at a friend’s house, for fear of wetting the bed. Now that patient can enjoy sleepovers. “That child just turned into a totally different and more confident kid,” Johnson says.

Varsanik shares a story of how grateful her patient’s parents were for helping them understand how OSA was impacting their child’s life. “Being able to give them the clarity on the root cause was extremely powerful,” she says.

In a world with millions of undiagnosed sleep apnea patients, progress in treatment and early interventions can be both promising and daunting, Yousefian says. “I’ve suffered through this issue when my child was suffering in school and dying right in front of my eyes,” Yousefian says. “To help him, I tried to understand the science of sleep medicine and combine it with the science of orthodontics and that’s how I got to where I am today.”