Jaws: The Story of a Hidden Epidemic 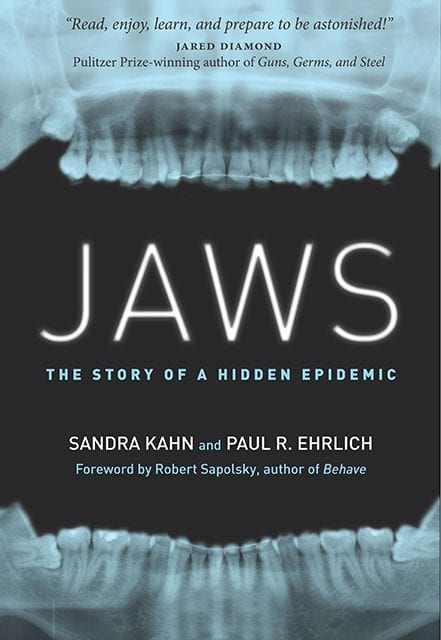 There’s a silent epidemic in western civilization, and it is right under our noses, according to a new book published by Stanford University Press. Jaws: The Story of a Hidden Epidemic tells the story of how our jaws are getting smaller and our teeth crooked and crowded, creating not only aesthetic challenges but also difficulties with breathing. Modern orthodontics has persuaded us that braces and oral devices can correct these problems. While teeth can certainly be straightened, what about the underlying causes of this rapid shift in oral evolution and the health risks posed by obstructed airways?

Orthodontist Sandra Kahn, DDS, MSD, and evolutionistPaul R. Ehrlich present the biological, dietary, and cultural changes that have driven us toward this major health challenge. They propose simple adjustments that can alleviate this developing crisis, as well as a major alternative to orthodontics that promises more significant long-term relief.

Author Kahn is a graduate from the University of Mexico and the University of the Pacific. She has 25 years of clinical experience in orthodontics and is part of craniofacial anomalies teams at the University of California, San Francisco and Stanford University. Her graduate work at the University of California, Berkeley was on physical anthropology and human craniofacial growth and development. She practices pediatric sleep apnea prevention and whole-body treatment, addressing body and oral posture to develop stronger jaws that fit all 32 teeth and house large healthy airways. She is an international lecturer, has published two books, Let’s Face It and GOPex – Good Oral Posture Exercises!, and has translated Dr. John Mew’s The Cause and Cure of Malocclusion into Spanish.

Author Paul R. Ehrlich wrote the 1968 bestseller, The Population Bomb. He is Bing Professor of Population Studies Emeritus and President of the Center for Conservation Biology at Stanford University. Ehrlich is a member of the National Academy of Sciences and a recipient of the Crafoord Prize (an explicit substitute for the Nobel Prize in fields of science where the latter is not given), the Blue Planet Prize, and numerous other international honors. He investigates a wide range of topics in population biology, ecology, evolution, human ecology, and environmental science. Much of his current effort is focused on the mechanisms of human cultural evolution and ways of directing that evolution to ameliorate the human predicament.

The Surgical Techniques that Can Bring Relief to Sleep Apnea